Jack and the beanstalk: Narrative tenses

Jack and his mother lived together. They were a very poor family who were always trying to make enough money to buy food. One day , Jack’s mother sent Jack to town to sell a cow so that they could make some money. However Jack was convinced by a stranger to sell the cow for a magic bean. He agreed and brought home the bean to his mother who was furious. She threw the bean out of the window and they went to bed without any supper.

The next morning they woke up to a big surprise. There was a huge beanstalk in the garden. Jack’s mother let Jack climb the beanstalk and at the top he found a castle where two giants lived. A female giant who was friendly, and her husband who did not like humans. When the male giant arrived he could smell Jack who had to hide.

A few days later jack discovered that the giants owned a goose which laid golden eggs. The naughty jack decided to steal one to take back to his mother which he did. However, a magical, musical harp saw Jack stealing the egg and started to play music to alert the giant who chased Jack. He was starting to climb down the beanstalk after Jack. Jack shouted his mother for help. His mother was working in the garden and saw jack and the giant, so she quickly found an axe. Jack cut down the beanstalk just before the giant could catch him. The beanstalk and the giant disappeared and Jack and his mother lived very happily ever after with all the money that they made from the golden egg! 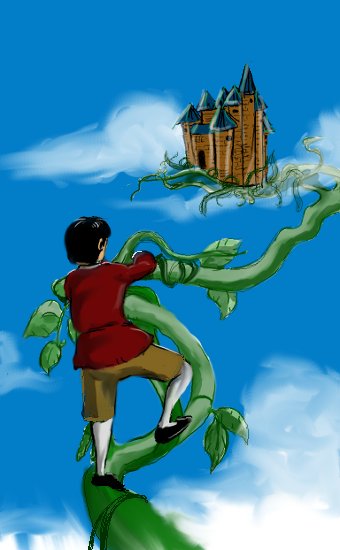