Florence Nightingale is mainly recognized as the founder of modern nursing besides having been a celebrated reformer and statistician. Before her, nurses were low class people with no preparation which led to a high mortality rate. As a result of the measures implemented in the hospitals and the foundation of the first nursing schools the rate of mortality went down drastically, all thanks to her. For those reasons she is responsible for saving thousands of lives and for relieving the pain of another great number of people; is this not one of greatest merits possible?

Florence Nightingale was born in 1820 into a rich, upper-class British family in Florence, Italy and was named after the city of her birth. When she was 1 the family moved back to England where she was educated mainly by her father.

At 17 years old Florence had her first experience that she saw as a call from God to devote her life to the service of others. Her status required that she marry an upper class man and become a mother but she rebelled against this and against the opposition of her family, to become a nurse. Indeed, she would not have had difficulty finding a husband as in her youth she was attractive, slender and graceful.

As a young woman Nightingale travelled to several countries such as Italy, Greece and Egypt where she strengthened her calling to be a nurse. She also made strong connections with politicians that gave her influence and support in the future.

The Crimean War: the lady with the lamp

Nightingale’s most famous contribution came during the Crimean War. In 1854, 38 nurses trained by her were sent to the Ottoman Empire. When she arrived, she was worried about the situation with such a short supply of medicines, hygiene that was far from being a priority and there were many infections. Indeed, there were more deaths from illnesses such as typhus, typhoid and cholera than from battle wounds.

She was a big part of the solution. Some sources have claim that Nightingale reduced the death rate from 42% to 2%, either by making improvements in hygiene, or by calling for the Sanitary commission. For example the commission flushed out the sewers and improved the ventilation. Death rates were greatly reduced.

She found evidence that demonstrated that high death rates were a consequence of poor nutrition, lack of supplies, stale air and overworking of the staff. These reports influenced the future design of hospitals and the introduction of good sanitation in working class homes.

Also, she wrote Notes of Nursing. This book was a classic introduction to nursing. She was fresh air in a time when nurses were regarded as ignorant persons. The book has a main place in the history of nursing of course for being written by the founder of modern nursing.

After 1857 Nightingale suffered from depression and illness causing her to be confined to bed for long periods. She died aged ninety, peacefully in her sleep.

Every year on her birthday International Nurses Day is celebrated around the world and the Red Cross introduced in 1912, the Florence Nightingale medal which acknowledges outstanding nursing service. 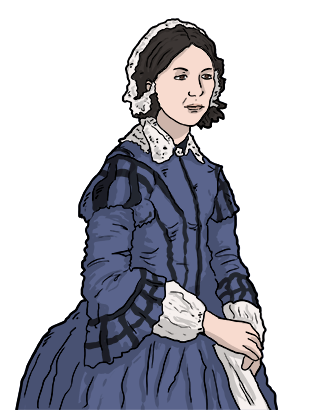