Alexander Fleming was a Scottish biologist, pharmacologist and botanist. He is responsible for saving millions of lives thanks of the discovery of Penicillin, for which he shared the Nobel Prize in 1945 with Florey and Chain.

Fleming was born in 1881 on a farm in Scotland. His elder brother was a physician and he suggested to him that he follow his career. As a result of that the young Alexander joined St Mary’s Hospital School in Paddington, where he graduated with merit. After the First World War, in which he participated, he came back to St. Mary’s but now as a professor of bacteriology. He was also Professor at the University of London and he was elected Rector of the University of Edinburgh for three years.

The discovery of the penicillin.

Fleming spent a large period of time actively researching antibacterial agents. He was witness to many deaths during the First World War from infected wounds. Actually, In an article he submitted he explained how antiseptics were killing more soldiers than infection itself. Back in England he continued with his research to fight these large numbers of losses during the conflicts.

By 1927 Fleming was researching the properties of Staphylococci, a bacteria. Being an untidy person in this case was a blessing for him and for the whole humanity. It follows that he was on holiday during the summer and when he went back his lab wasn’t exactly clean. He had stored all his cultures on a bench in the corner, then, he noticed that one culture was contaminated with a fungus, and that the colonies surrounded by the fungus had been destroyed. Later, He grew the mould in a culture and found that it produced a substance that not just killed the staphylococci but also many disease-causing bacterias. He identified the mould as being from the Penicillium Genus and he named the substance that it released “Penicillin”.

The problem he found was that he wasn’t able to produce this substance efficiently. It was in Oxford where Ernst Chain and Howard Florey and an entire team developed a method of purifying penicillin and consequently mass production and distribution were possible by 1945.

Fleming’s discovery is the basis of modern synthetic antibiotics. It is difficult to calculate how many lives his finding has saved, but probably millions. For those reasons it is more than fair that he received the Nobel Prize in 1945 and was also ranked 1 of the 100 most important people of the 20th century by Time magazine. 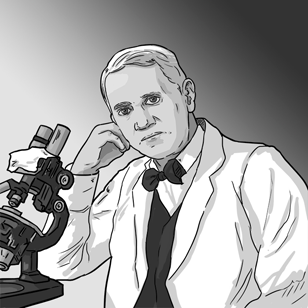