Cnut, also known as Cnut the Great and Canute was a King of Denmark, England, Norway, and parts of Sweden. Nobody knew exactly when he was born, but he died 12 November 1035. Cnut was a very wise and well respected man whilst he ruled as king. However, when he was younger and lived under the influence of his father, a Viking King, he behaved much more violently. He was a blood-thirsty warrior and acted wildly. Yet when he became king he changed his ways because he wanted to be respected and this way he appeared more regal. Whilst King he succeeded in building good monasteries, he divided England into four great earldoms and he also introduced new laws which his people found very useful.

Many times Cnut found his responsibilities difficult. Since he reigned four different countries he needed to divide his time between them and often discovered that when he concentrated on one country the other countries became angry. But although there were sometimes problems, his people usually considered him wise and a good man.

Cnut also showed many noble and selfless qualities. He was never overwhelmed by his powers and he never pretended to be more than he was. A story exists that he always hated his nobles complementing him trying to win his favour that he decided enough was enough. One day, one of the nobles said he was so amazing that even the sea would obey him. Cnut wanted to show people how ridiculous this was so he went onto the beach and sat on his throne. He demanded the sea to go back but of course it didn’t and it wet him completely. 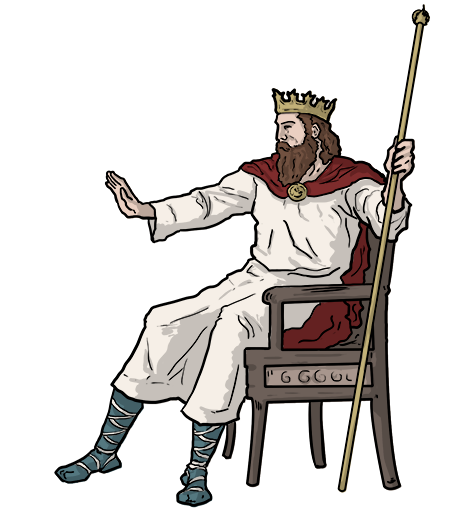